Trinity School of Medicine has always prided itself on the strength and ambition of its students. So many of our future physicians come our way looking for something new; whether that's a unique learning environment built on support and a strong relationship with the faculty, a curriculum with an emphasis on clinical skills and service to patients, or just a fresh start. In this next edition of our alumni spotlight, meet Dr. Apoorva Jayarangaiah, a hospitalist at Wake Forest Baptist Medical Center in North Carolina. 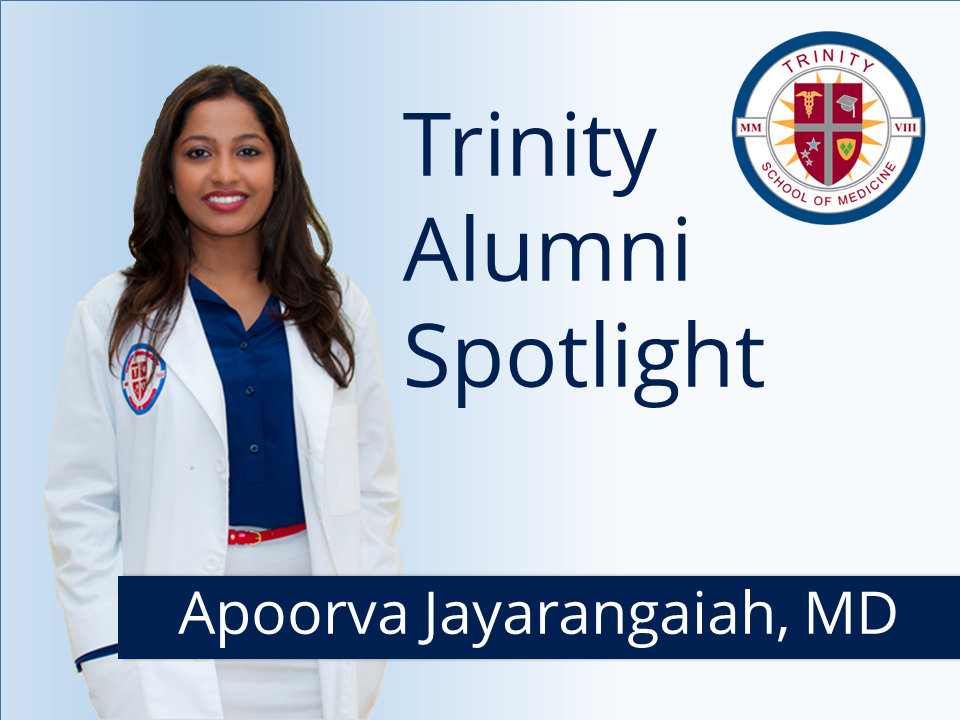 Click the above image for a video recording of Dr. Jayarangaiah. Or, if you're a reader, continue on with the blog as normal!

Dr. Jayarangaiah has just finished her internal medicine residency in Marshfield, WI (where she served her final year as chief resident--an ongoing trend with Trinity graduates).

While her next step at Wake Forest will be working as a hospitalist, her long term goals are on specializing in hemotology-oncology.

Her path into medicine was, in hindsight, inevitable. Her father is a rounding physician at Milton Cato Memorial Hospital (the largest hospital in St. Vincent and an institution with close ties to Trinity). As a young adult, she'd acompany him to the hospital and on rounds. She was immediately and absolutely captivated with diagnostic processes, patient interaction, and in no small measure, the passion of the doctors, nurses, and staff for the patients. In her own words, "There were so many modalities and dimensions to always consider; whether you’re interested in public health, women’s health, preventative care,  any of it, it appeals to your intellect, there's a great social component with patient interaction, I couldn’t imagine doing anything else."

Dr. Jayarangaiah chose Trinity after comparing a variety of different schools. While she was attracted to the quality of the curriculum ("on par with US medical schools"), the emphasis on early, integrated clinical training to compliment the basic sciences sealed the deal.

Of course, culturally, she was also attracted to the school's diversity. Vincentians, Americans, and Canadians all meshed together in a "very collegial environment." Apoorva was born in India and moved to the Caribbean at ten years old, something that gave her an interest in, and fondness for, cultural diversity. It was a natural choice to find more of the same. She found her footing as the unofficial cultural liason between US and Canadian students and the rest of St. Vincent, and speaks fondly of their reactions to some of the island's idiosyncracies.

After her basic sciences, her clinical rotations were in Chicago (one of Trinity's stateside options for students). This gave her a fondness for the midwest that lead to her pursuing relatively local residencies. When she found out about the program in Marshfield from a colleague and investigated the structure of the program, one that worked with her professional interests of both internal medicine and further specialization down the road, she interviewed and made her decision. "It's so much work, but at the same time, it felt very comfortable. It felt right."

The early exposure to patient interaction through Trinity proved vital in her rotations and residency. She was careful to note, "It [Trinity's unique approach] allowed me to be much more comfortable much earlier than some of my colleagues" She continued, "A medical school off-shore created this adaptability and versatility in all of us that I really appreciate. The volatility of work and patient load in residency can be demanding, but I felt well equipped."

Dr. Jayarangaiah was recently honored with the ACP National Young Achiever award. With the move to a large, academic institute like Wake Forest, she plans to not only continue, but expand her research. A major focus of hers has already been the incorporation of ultrasound equipment at bedside as a crucial diagnostic tool into residency curricula, going as far as developing ultrasounds as an adjunct in ubiquity to stethescopes, with the hopes of transitioning that curriculum into a standard element of training, bringing it to current hospitalists as a part of CME.

Any Advice for Incoming Students?

"The apprehension and anxiety you feel before and even after you make your [medical school] decision is natural. With Trinity, it was helpful to know that people had gone this route, achieved their dreams, and found great success." She added that it was "a great decision coming to Trinity. The faculty, administration, and friends each played a pivotal role in my continued accomplishments. It was such a great opportunity. The exposure to different healthcare systems, different populations, it gave me a better, more global view. I've heard from everyone I went to school with that it made them a more well rounded person. Trinity's culture plays such a major role in that personal growth. You have to be self-motivated, and it’s not always easy, but it’s always worth it.