Secure An Interview to Start Your MD in 2015

We love this time of year! Our Admissions team is preparing to pack our suitcases and head to major U.S. and Canadian cities to host Information Seminars and meet one-on-one with qualified applicants for the January, May and September 2015 start terms.

> Check back frequently as we'll continue adding locations and dates

If you're serious about starting an MD program in the coming year, Request a Regional Interview Now by submitting your current AMCAS, TMDSAS, OMSAS or AACOMAS Application Report for immediate consideration. Or, complete Trinity's Online Application for Admission and with a completed file, you'll have a decision from the Admissions Committee in 4-6 weeks.

Interview times fill quickly, secure your time by submitting Application materials as early as possible. The team will review your credentials for eligibility and will contact you with available dates and times.

Have some questions or want to find out if Trinity is a program you should learn more about? Call, Skype or email with us. Every question is a good one and we're happy to provide you with the information you need to make an informed decision.

We hope to meet you soon and share the many advantages available to students who attend Trinity School of Medicine. 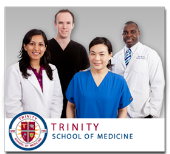 Start here to request an MD Admissions interview and you may be one step closer to telling friends and family, "I've been accepted to medical school!"