Trinity School of Medicine, St. Vincent and the Grenadines held a White Coat Ceremony for the students who will earn their Doctor of Medicine degree in as part of the Class of 2018. Twenty-five incoming students were robed with their White Coats at the impressive and inspiring event, which took place at the institution on Saturday, May 10th, 2014. While all of the incoming students claim North America as home, they represent a diverse set of ethnicities and cultures, one of the benefits of studying abroad. Nearly one third of the incoming students came from Canada with the other two thirds from the U.S. The 25 students earned their place in the program with strong academic credentials from large Universities and small Colleges including:

Their paths to the MD program started with Bachelor degrees in Biology and Life Sciences, Biochemistry, Chemistry, Neuroscience, Physics, Biopsychology, Hospital Administration, Medical Laboratory Science and even a Fine Arts major! Approximately one third of the matriculating class is taking advantage of Trinity's Individualized Learning Plan (ILP), affording them the opportunity to develop the study habits, approach to learning and test taking skills to excel academically over the course of their medical education. The ages of the students range from 22 - 35 with an average age upon arrival in St. Vincent being 26. The men slightly outnumber the women by a 60/40 ratio.

Presiding at the ceremony was Dean of the School, Dr. Douglas Skelton. Dr. Skelton informed the eager students that the White Coat Ceremony is always such an important event in the life of any doctor. “When I put a white coat on a student I always remember that young lady thirty years ago, on whom I put a white coat and who has hung in there and today, now looks after my mother.” He congratulated the prospective doctors with the quip that, “That gives me the assurance that one of you will hang around to look after me!”

Governor General, His Excellency Sir Frederick Ballantyne, MD, took the time to welcome the students, giving them some simple guidelines to follow in the country that will be their home for the next two years. “We are very hospitable, very friendly. There is not another people that is more hospitable and friendly anywhere else in the world,” he said.

President of Trinity, Mr. Steve Wilson, shared his own words of welcome and telling the students that although everything is new at this stage, they would have the support of the school and Trinity family going forward. President Wilson then introduced a video in which graduating students from the Class of 2013 gave words of advice to new students on issues including the importance of the White Coat Ceremony; coping mechanisms and study tips; opportunities for volunteering that would enhance the quality of residency; preparation for residency; pathways for future careers; and of course, enjoying the island experience and the beauty of the people of SVG.

Dr. Paula Wilson gave a brief outline of the origins of the white coats and why it is a symbol of the medical profession. “The first White Coat Ceremony,” she said, “took place on August 20th, 1992.” Dr. Arnold Gold had come up with the idea, to make medical students aware of their responsibilities, not only as academics but also as humanitarians. Today, one hundred and thirty schools around the world hold such ceremonies. “It is like a rite of passage,” Dr. Reynolds said, “and robing you with white coats is a symbol of Trinity’s faith in you all.”

Students arose from their seats, White Coats strategically placed over the right arm, and walked towards Dr. Andreas Reymann, Senior Associate Dean, Academic Affairs and Evaluation and Dean, Dr. Douglas Skelton to be robed. Each was additionally welcomed into their new profession with a handshake from Governor General Frederick Ballantyne, himself a medical doctor.

The ceremony was closed by Dean Skelton and a reception followed at the Paradise Beach Hotel, at which students were given the opportunity to meet faculty members, relatives, friends and other well-wishers.  The students’ first term began on Monday, 12th May.

To be part of the next White Coat Ceremony in September 2014, connect with the Admissions Team or Apply Online today. 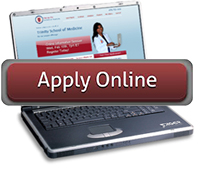