Gratitude, Giving, and the Grenadines.

Trinity School of Medicine is not a typical medical school. While the curriculum is current and rigorous and the standards are high, the people make the school truly unique. In the spirit of the American Thanksgiving holiday, we'd like to highlight just some of what makes Trinity so special.

If there isn't an interview scheduled in your area, click the link and fill out the (top left) form to request alternate options.

Trinity School of Medicine is an institution with many goals, but one of them is about maintaining academic momentum.

Because of this, Trinity offers rolling admissions to its incoming students, providing January, May, and September start terms. Each has its strengths (for example, while Trinity's class sizes are far smaller than other medical schools, January in particular is limited to 20-25 students to create an optimal learning environment for those that thrive on closer interactions). September is for students who are gifted, eager students but, for whatever reason, just didn't end up in their first choice school in the US and Canada.

A 2016 Start Is Still Available to You

This is not to say that Trinity is just a "plan b" option, though. The quality of the education and the student culture of service stand out for past graduates as critical factors in shaping the type of doctor they eventually became in their residency and practice. Trinity carefully selects for personality (famously evaluating "the whole person" and not just the transcript) when considering admissions, which is why the interview is so important and, by many school's standards, very early.

On Interviews, Timing, and the Intersection of Value

Medical school interviews are a major component of the admissions process and should be considered a significant milestone by prospective students. Excellent doctors are individuals with compassion, drive, and the desire to make a difference. Characteristics like these are difficult to assess from grade point averages and MCAT scores alone. At Trinity, we endeavor to personally meet with as many qualified individuals as possible as part of our holistic approach to admissions. To facilitate this, we send admissions team leaders to cities across the U.S. and Canada to meet one-on-one with prospective students, in person and close to home (or school).

By completing an interview request, you are signaling your interest in meeting with our team to discuss your candidacy for our MD program. Interviews enable students to demonstrate their personal strengths and how it balances with their academic and extracurricular experience. It's a remarkable opportunity for both sides to ask questions and gauge the fit between the goals and objectives of the interviewee and the learning environment and approach at Trinity.

Trinity is an institution dedicated to its culture of welcoming and support. Should you be chosen to take part, bring your best self, but also come armed with the confidence and comfort of knowing that the admissions team has the same interest in your future success that you carry to the meeting, and they want nothing more than to see you become a great doctor and proud Trinity alum.

With that, click here to see the regional interview schedule for 2016 candidates.

Note: Candidates are only considered for interviews if they have submitted all preliminary application material.

This includes application documents from AMCAS, AACOMAS, OMSAS, TMDSAS, or Trinity's online application; MCAT scores; transcripts; letters of recommendation; and the application fee. If there are any questions about any of these, do not hesitate to contact the Trinity administration at admissions@trinitysom.org.

MCAT, Step 1, and the Physician Shortage: The Critical Role of Trinity

One of the most common questions our admissions team is asked is, "I've heard matching is much harder for IMGs. Is that true?"

Our answer is always the same. "No, it's not true."

Sometimes explaining this involves first getting into the complex history of medical education standards, or the outdated view that Caribbean schools lack rigor or quality. CARICOM has gone to great lengths to rectify this with programs like CAAM-HP, and Trinity has always prided itself on the quality of its educaton, but there are still challenges to overcome.

That said, it's crucial to remember that there are many, many factors that go into the residency match. We'll attempt to address a few of them in this post.

First, though, we need to speak to the outdated stigma and calm anxieties perpetuated by (understandably) nervous student communities and the uninformed: while the United States and Canada are facing physician shortages, and while this is often attributed to a lack of residency opportunties, that is not entirely accurate.

The demand for physicians outstrips the number of medical students produced by US medical schools, let alone the number of residency slots available (to the tune of about 4,000 extra residencies, with that gap projected to grow an additional 6000 over the next ten years). The residency slots are there; the demand for doctors is high. Being an international medical graduate is simply not the barrier it once was, with the American College of Physicians openly acknowledging not only the value of these students and their passion for medicine, but recognizing that the United States healthcare system actively depends on IMGs to address the medical needs of the 300,000,000 people living within the nation's borders.

So, why the perception of limited access creating a physician shortage?

It's more than a perception. There is a choke point, it's just the match receives too much focus; a significant portion of the issue is in the medical school admissions process itself. It can be addressed, though.

The competition to be admitted to an allopathic US or Canadian medical school is very high, and one of the major factors is MCAT scores. The MCAT, a test designed to measure a student's ability to perform in medical school, is ostensibly a good thing; it helps schools get through the field of applicants efficiently and creates a barrier for people that may dream of becoming a doctor but just aren't adequately prepared or suited for it.

Except there is a disparity between its effective value and its application. Don't get us wrong, it's an important metric, but it can be over emphasized and therefore too restrictive. As a result, a lot of excellent physicians don't get the educational opportunity they need to join the field and make a difference.

You don't have to take our word for it. Dr. Darrell Kirch, president of the AAMC, said it himself, "The MCAT doesn't predict how good a doctor you'll be," he said. "I can point to many very successful medical students when I was a dean who had scores below that, and those [with scores] above that who struggled for various reasons."

This is why Trinity looks at the entire candidate, and evaluates on a much deeper level. As a smaller school, this is a major advantage for our team and our students (more on that later). We have so many students that showed great potential with MCAT scores that were good, not great, who then went on to not only place near the top in their Step 1 scores and then proved themselves as excellent physicians. Trinity changes the MCAT from a barrier to clear to an indicator of progress: the MCAT score may be where a student's knowledge began, and it can highlight any strengths and weaknesses early on, but it becomes about how far they've come and show their capacity to grow.

The National Residency Match Program (NRMP) surveyed residency program directors across the country about their decision making criteria and determined that the single greatest factor in assessing whether an applicant is considered is their step 1 score. Trinity aggressively prepairs its students for this with its comprehensive Step 1 prep program, as well as its curriculum of early clinical experience designed to cement classroom lessons.

And it works. See the data yourself. 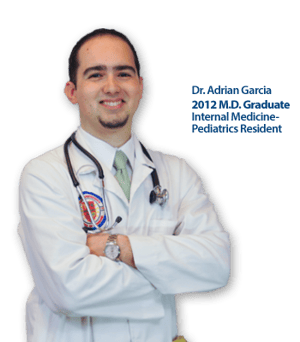 Trinity School of Medicine has always prided itself on the strength and ambition of its students. So many of our future physicians come our way looking for something new; whether that's a unique learning environment built on support and a strong relationship with the faculty, a curriculum with an emphasis on clinical skills and service to patients, or just a fresh start this. We have so much to offer, so it delights us when each and every qualified student decides to take the next step in their medical education with us, with Trinity.

The Ministry of Education in St. Vincent and the Grenadines recently collaborated with the St. Vincent and the Grenadines Medical Association to host the 11th Annual College and Career Exhibition. Trinity School of Medicine not only attended but showcased its opportunities to students and other visitors to the event about all the medical school has to offer the Caribbean.